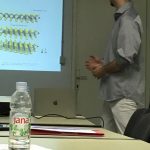 Valentino Jadriško successfully defended his master thesis which he did in the laboratory for optical response under the supervision of his mentor Dr. sc. Nataša Vujičić.